Enjoy The LIFE You Want Most,

By GOING FURTHER As An NP.

Connect with like-minded NPs + get accountable to your most exciting, successful year yet!

The NP Society is a career-advancing online membership community for nurse practitioners and NP students.

When everything went left in 2020,
Nurse Practitioners everywhere noticed a few key things in common:

And while each person’s circumstances are different, we are united in our DESIRE FOR COMMUNITY CONNECTION.

This Desire Catapulted
Me (And 250+ Other Nurse Practitioners) Into Our
Most Transformative Year!

Finally, this group of NPs started building meaningful + important CONNECTIONS, inside of a safe space where everyone…

If you’re thinking, “yeah but WHERE IS THIS GROUP?!?!”

It’s right here, and we’ve been waiting for you.

The NP Society is the first community of its kind designed for Nurse Practitioners who no longer want to “go it alone”… while supporting you with the career training and professional development to for better work/life balance, better paying jobs,
+ better opportunities so that you can focus on what actually matters: You living your amazing life, inside + outside of the clinic.

(plus looking fiiiiine & feeling the best you’ve ever felt, I might add.)

How To Know If This Is For You?

You’re a nurse practitioner, NP student, transitioning to NP, seasoned or brand-new NP… and you want to get out of your own blocked way by associating yourself with a well-vetted community that can help you navigate through the challenges you didn’t learn how to solve in school.

You’re done hiding with imposter syndrome, making unconfident shot-in-the dark clinical decisions and feeling like you suck at your job – you’re SO READY to enjoy being an NP and make an impact on improving patients’ lives!!

You already KNOW about the magic of investing in building relationships and high quality networking, and want to surround yourself with a curated group of likeminded pro’s.

Stuffy, pretentious, or boring cookie cutter “benefits” doled out by other organizations don’t interest you – You want perks you’ll actually use, like 1-on-1 mentoring, monthly live masterclasses, and CME credits! (to name a few)

Scrolling through social media for decent career tips is wasting your already-limited time. You’d much prefer logging into a beautiful & intuitive community (on an OFF-Facebook platform) where you can ask your specific questions directly.

Taking charts home with you every night, feeling burned out, and being unavailable to squeeze in self care and rest DOES NOT thrill you – You want to take your life back!

You want to wake up every morning like, “Howwww did I get my dream life so quickly?! I AM SO GRATEFUL!”

You’re ready to own that enjoying life (while also making great money doing work you’re excited by) iiiis possible – and you’re open minded to having accountability towards making your dreams a reality.

HOW IT WORKS & WHAT IT INCLUDES: 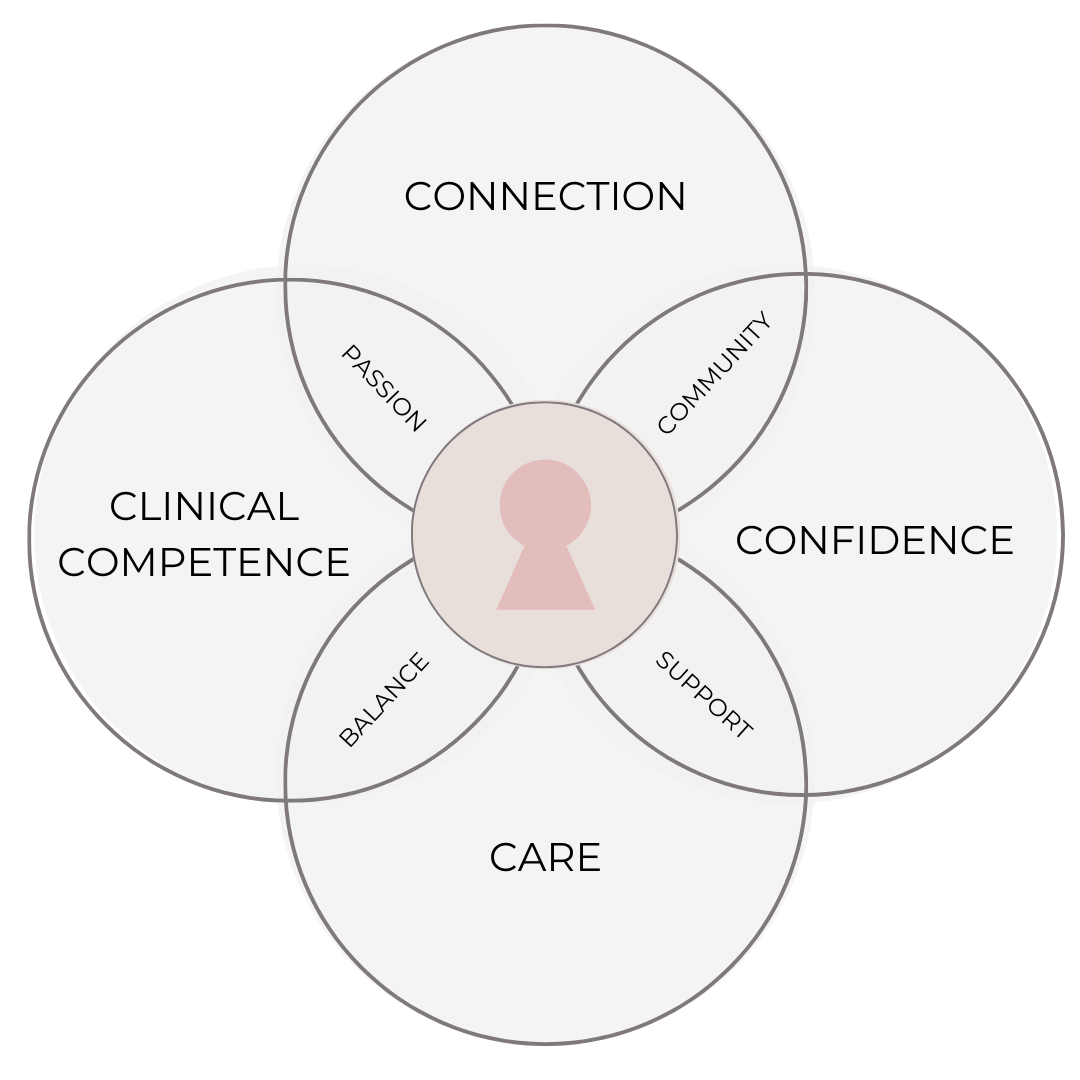 NP Community Connection powers everything we do inside here.

In a world where we can reach virtually anyone, at any time, from anywhere in the world, how is it that so many of us feel alone?

Here, we champion vulnerability, working together peer to peer, and deep diving into authentic connection. Human connection is not just good for the soul, but is enormously instrumental in strengthening our core confidence as well as improving our career outlook and opportunities.

How you’ll GET CONNECTED inside NPS:

✅  Peer to peer discussions on a vast range of topics

✅  Monthly challenges where we hold each other accountable

The research is clear: there is an undeniable link between competence and confidence. Without confidence, we shrink down into fear, and when we’re fearful we don’t take any action.

So how do we fight fear? By developing, nurturing and strengthening your clinical skills.

Through comprehensive knowledge-building action, you’ll develop more belief and trust in yourself that you can reliably show up at your best and perform well.

How you’ll IMPROVE YOUR CLINICAL SKILLS inside NPS:

✅  Discounts to the annual NPS Conference

You’ve done a ton of work on mindset, personal growth and confidence, but you’re simply NOT seeing or feeling the results.

Imposter syndrome and self-sabotaging beliefs of “not being good enough” harm nearly every NP I’ve ever met, particularly students and new grads.

The NP Society sets up a “playground” for you to build confidence as a provider, and to improve your skills quickly, with ease, and through sincere enjoyment in the process.

How you’ll BUILD CONFIDENCE as a provider inside NPS:

As an NP, if you’re not caring for yourself, how are you going to care for others?

Protecting, maintaining and improving our personal health and wellbeing is one of the most OVERLOOKED variables that makes a real positive difference in the lives of our patients. But because of the nature of our industry, self care is usually the first to be dropped from our list of priorities.

NPS is “giving you back permission” to care for yourself. You’ll get all the tools, training and resources to help you restore your energy and feel your best.

How you’ll TAKE CARE OF YOURSELF inside NPS:

What are NPS Masterclasses?

Receive real-world guidance and actionable takeaways for thriving in your personal and professional life – (Why didn’t they teach us this in grad school?)

A few of the Masterclass Replays 🎥 in the Vault already include:

What Else You Get
With Your Membership…

Led by a new member of our community each month, recharge with authentic human connection again.

Pop the champagne or curl up with a cup of tea – Whatever your style, come together for a fun evening that’s full of surprises… Sweatpants or stilettos are welcome!

Book a mentor, ask questions and get on-demand support from NP’s who are already thriving.

👥 A Diverse Community of Peers

Learn from an inclusive community of like-hearted professionals from NP students, to new graduates, to mid-career and veteran Nurse Practitioners – we’re intentionally creating an equitable place for every NP to call home. We welcome members from different communities, different backgrounds, different industries, and different experiences.

Pssst… as the community grows, there could be an annual in-person retreat, local in-person meet-ups and more.

Leverage a private network of NP’s, career coaching, job search strategies, and more. Wherever you are in your unique journey, grab the clinical resources at your fingertips, 24/7.

Search for specific trainings from our past live masterclasses or binge watch them all! Tune into the Self Care Library, submit a coaching question, watch the Anti Racism & Bias training, and more.

🤝 A Community Holding You Accountable

Find your next best friend through our inclusive, secure and private community. Easily cultivate a strong support circle at “The Water Cooler”, inside Community Challenges and forum threads, and of course, at our members-only events.

Get Continuing Education discounts and special NPS-Only offers and discounts.

We’re hard at work idealizing all the exciting add-ons we can include in your membership.

Plus, as the community grows, there could be an annual in-person retreat and local in-person meet-ups!

yes, please! i'm in
I’ve been a nurse practitioner for two years and I practice clinically in psychiatry and I’m an adjunct professor as well. The NP Society has provided me with rapidly developing personal and professional connections! It’s been so refreshing to conversate with people who truly understand the ups and downs of our day to day. Being in this community has also given me the confidence to launch my business which will be focused on professional and career development for both aspiring and current psychiatric nurse practitioners.
-Tempesst

Sneak Preview of the np society

See for yourself what’s inside the NPS community space!

Become a member for just $37 a month! 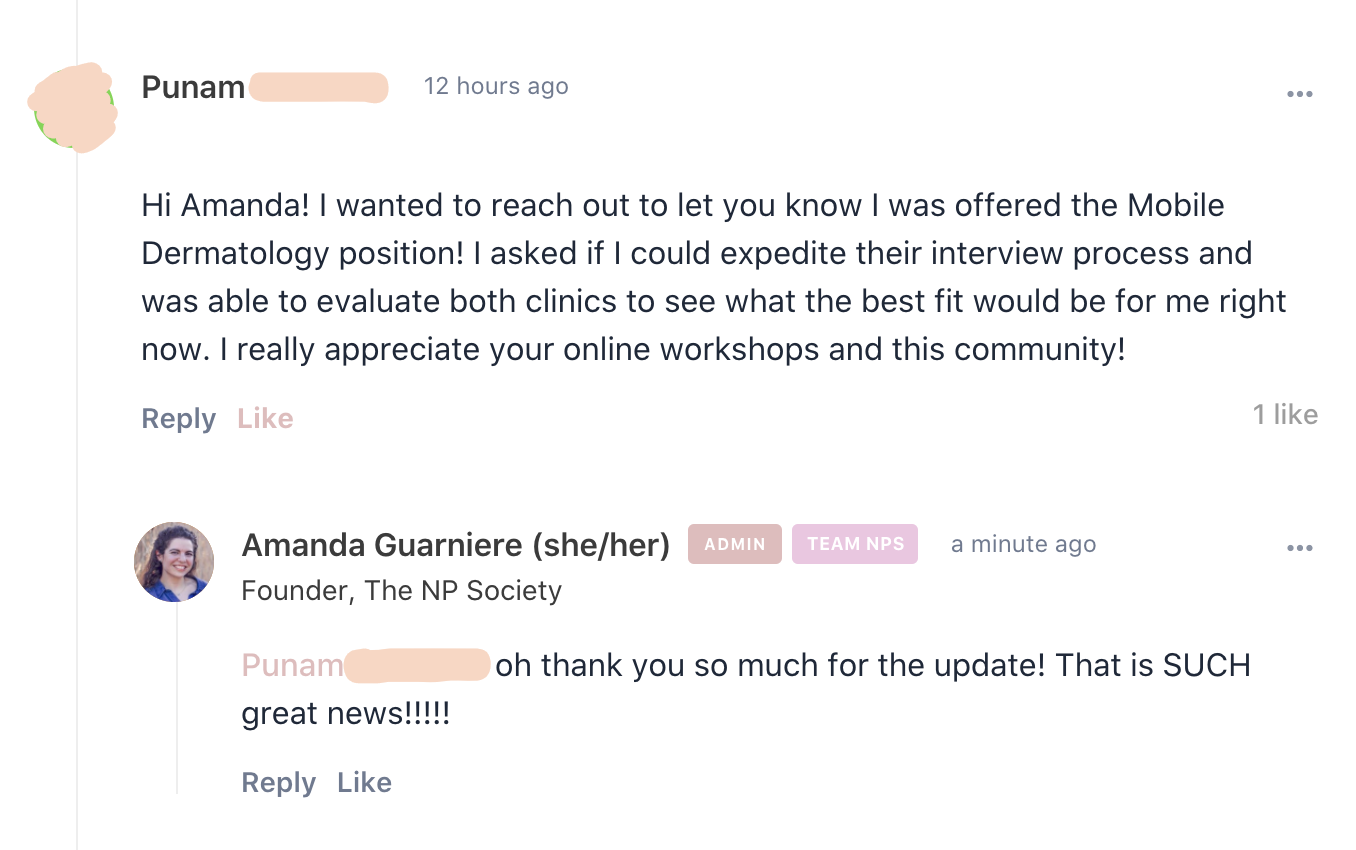 Take your seat at the table of NP greatness. Includes every one of our monthly events, masterclasses, workshops, and access to the ever-evolving NP resource library, and members directory. Includes 2 CME hours monthly.

The NP Society is hosted on a secure, dedicated community platform and our weekly events are held on Zoom.

Can I join for a month and then cancel?

Yes, of course. But there’s a reason why this isn’t a one-time purchase course. Becoming an integrated nurse practitioner is a long-game, and we’d love for you to plan to stick around for a bit! If you wish to leave the community, click here to login and change your subscription. Once you cancel, you will automatically be removed from the community at the end of your current subscription and you will not be charged again.

Absolutely! This is a student-friendly group.

YES. We offer up to 2 CME credit hours monthly and have a library of previous calls for you to watch and earn credits through your reflection on the content.

Can I use my continuing education stipend from work for this membership?

This is a great question – and the answer is that it depends on what your employer allows. If your employer covers membership dues for other professional organizations, then I encourage you to submit your payment receipt and request reimbursement. If you need another copy of your receipt, our support team will be happy to assist you! We have had several members get their NP Society fee reimbursed.

What if I’ve been an NP for a while? Is this worth it for me?

As an NP of over 10 years, I wish this existed long ago! If community and connection has been missing from your professional life, too, and you’d like to expand your professional advancement opportunities, NPS is the place for you.

Hi, I’m Amanda. Ten years ago, when I became an NP, I felt as though I was thrown into the fire in my first job.

I was all alone, with people I had never met before, who were my supervisors and my lifeline all in one.

I missed my classmates. I missed people who knew what I was going through. They were struggling too, but I didn’t know it. I was too scared to admit this feeling, because I thought I was the only one.

Ten years later, after growing and blossoming as an NP, and after serving on faculty of an NP residency program, I have seen what can turn that transition into a transformation.

The power of community.

In a profession that is notoriously unsupportive to new graduates and NPs, there are zero safe spaces for like-minded NPs to come together and bond and grow over their shared experiences.

We have our professional organizations, sure, but memberships without true community and connection feel lonely and, I’m just going to say it, unexciting. The benefits are stale and the value is seriously lacking.

The NP Society is changing all of that.

Imagine belonging to a transformative team of empowering human beings who have your back and who support you unconditionally.

A safer, sacred community of NP’s where questions can be asked, connections created and loads of wisdom can be exchanged.

Feel into the experience of actualizing your fullest potential,

This is just a taste of what’s waiting for you inside the NP Society.